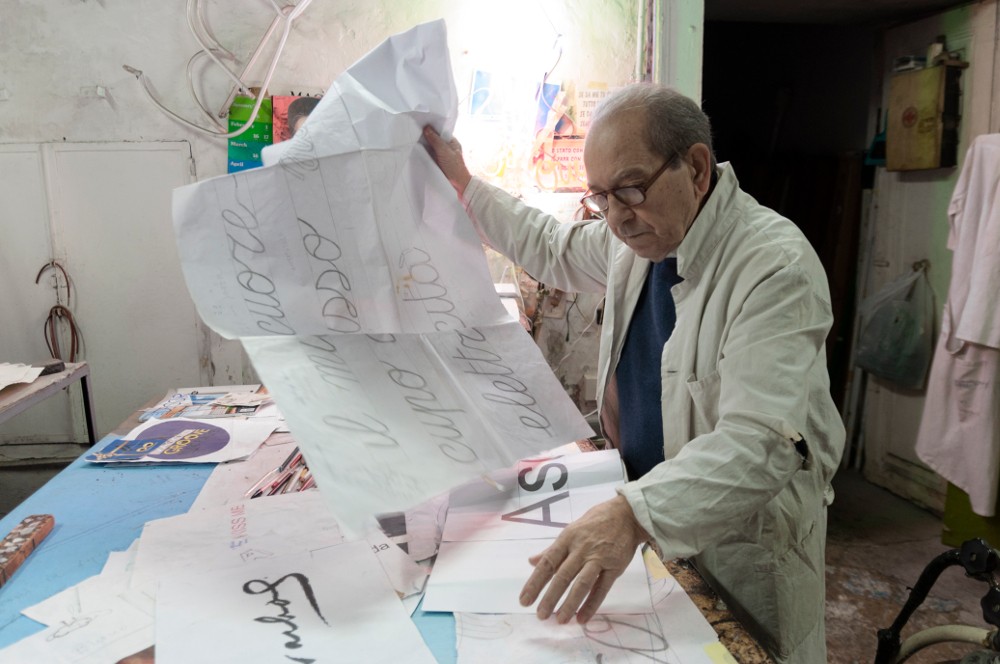 We introduced you Umberto Pintore, a Neapolitan who shapes neon letters, through the Soleil editorial project of the Agnese Tamburrini graphic. Let’s get to know Umberto’s persona and story better thanks to a brief interview directed by one of the very students of his amazing laboratory.

How, when and where did you learn to blow neon? Are there particular terms in your job?

I accompanied my brother in this factory, a match, such match stood behind this building, at the first number. We’d go down to find the factory at the bottom of the building. It was named “glass-blazery” as you blow glass after it is blazed. I asked my brother “Renato, what are they doing?”, “They’re making neon luminous signs, blown glass”. For me it was love at first sight, I fell for it.

“Renà, can you talk with that accountant friend of yours?” I used to be an optician, I was 17/18 years old and maybe it was already late to master this other job. But it was love at first sight, so I seized it. For real. The blowers who worked there were jealous, they understood how i like this job and they tried everything to keep me away from the blowpipe. I still remember how there was a certain Italo Verginelli who travelled through Italy on a contract. One year in a factory, two more in another one. That year he truly came to this factory. They used to say he was the best of Italy.

I thought “I’m lucky, it’s the perfect timing, perhaps I’ll learn something useful from him”. And, as I was saying, starting from that day he had me close to his heart, and he started talking with those men working at the factory, and from then on everything went for the better, yes. I seized this job. I seized it. It’s been several years of work, it’s been 43 years inside here. However I’m not sure whether it was wise of me to change that job, but it surely gave me satisfactions, this is neon, you see? [Opens a drawer and points a faucet] It’s a red gas, and it’s called neon. This other one is Argon, and you can’t see it as it is blue-ish.

Was the choice of continuing to work with handcrafted neon a successful one? How much do you work nowadays?

Right now my workload remarkably lessened as LED came out… regardless seeing some really ugly LED signs, there’s pharmacy in Piazza dei Martiri, over there, in the corner next to the newsstand, half of the letters are turnt off, those cost a lot of money.

How do you draw the letters, did you study topography? What kind of works did you make?

I’m not a draftsmen, I’m not good at it, but I complied with cursive. It is to consider there are many types of cursive, different styles. I draw the letter, then I take the needed glass and I begin. The glass gets blown as it heats up. The artist decided to create this work here, the meaning of the drawing is linked to illiterates, whose signature is an X. I created, for and Italian-French artist, Lauren Garcon (?) some asterisks, I have them here, now I’ll show them to you. All these asterisks are from a 1610 drawing by Galileo Galilei. They’re one different from the other, with those little stars you see there. This artist drew it for me, even smaller than these ones, with a patience like Giobbe’s! These I kept, since he ordered them in bulks, I did them to anticipate him. What did he do then? He then ordered some other which however weren’t similar to these ones, so they remained here. He always changed their style, you see? Constantly.

Then there’s an architect who is present even worldwide, do you know him? [takes the June 2015 issue of Decor] Well, he made me create this work for a house in Capri.

Ascolta il cuore se il sole scalda (“Listen to your heart if the sun burns”), I made a whole sentence following this characters from the typography, respecting the spacing, I linked them.

This one too was made by me, Abiura di voi (“Abjuration of you”), I asked him to explain me the meaning of this word, it is something similar to contempt, I don’t know. Now you’ll laugh, but this work was made a lunatics doctor. Seriously, he put it in his studio.

Nowadays, digitalisation allows to create signs fast and affordably. You’re one of the few who handcraft too. How do you manage the balance of these letters, do you work with schemes to produce letters in series?

Well, to do this we rely on our naked eyes, exclusively on naked eyes. [laughs] In the past, each factory had a draftsman. Now you leave the task to a typography. But we, who do this procedure, find it inconvenient. For example, I’d do a line but it had to be double to put neon at the centre, you know what I mean? You see, it depended on the tube, 12 of diametre, 15 of diametre… you made the letter based on its diametre. Do you see this sentence here?
This was made by the typography, then I handcrafted it. Il mio cuore è un cupo abisso (“My heart is a dark abyss”). [laughs]

This is all handcrafted. Then I weld the electrodes by hand, you see? I blow from the other side and weld the electrode.
The electrode would be the terminal, one here and one there, for each element. The electricity then activates. The element to be charged with neon doesn’t need mercury.
Did take a picture of the little tree? It’s nice. Who’ll buy will put it in the closet to light it up again the next year, for each year if it’s found back. You must photograph this, soleil means sun in French, I made it for the French artist indeed.

How do you imagine this work to become in a few years?
Don’t you have assistants or pupils who want to carry this work on?

No, I’m alone. I once had two people who assisted me, now they left, they were older than me. However now, with the quantity of work that’s left, I can easily make it on my own. If I assume some young man I need to insure him, because it’s dangerous in here, there’s flames and high-voltage electricity. We remained just a few though! I honestly don’t know, the work is hard and no one really wants to learn.